Posted on October 22, 2012 by CIRCUMNAVIGATOR

I have been on many great road trips until now. Both the short day trip ones and others lasting several weeks. But the longest road trip must be when I was driving around Germany as a sales representative from 2002 to 2006. Some might say: “How can that be a road trip? – that’s work! And sometimes you did sleep in your own bed during those 4 1/2 years, didn’t you?”.

Experiencing Germany from the Autobahn

Well, every trip from point A to B is what you make out of it, and driving around Germany as a part of my work was an opportunity to see and experience another country. Throughout the years there, I drove some hundred thousands of kilometers which meant that I just from behind my wheel saw a great part of Germany’s landscape and architecture. Germany is a very big country (at least seen from an European perspective) and has so many diversities to offer from the flat North to the Alps in the South, from the densely populated industrial cities in the West to the former DDR in the East, and from the big multicultural Berlin to small countryside towns. For those who have only been in the big cities or driven on the Autobahns (motorways) in Germany, they will be amased how much lovely countryside there actually is in this country.

Listening to the radio while road tripping

I admit it, driving on the German Autobahns can sometimes be a bit boring, especially if you land in one of the numerous queues on a Friday afternoon or during the holiday season, but thats where you have to be inventive. If you are lucky, the landscape around you is worth taking a closer look at instead of at the speed of 130 km/h plus. Another great thing to do, is tuning in on the local radio station. Apart form practicing your language listening skills, you also get to know the culture of the country. And that counts for everything you listen to – not only the radio news, but also the music. I don’t think I would ever have gotten to know the lovely music of Herbert Grönemeyer or Xavier Naidoo, if it wasn’t for my time in Germany.

Another advantage of listening to the radio while on the road, is the warnings about road accidents and the following queues. My craziest “listening to a warning” moment was when I on a busy late Friday afternoon was myself part of an accident. The driver behind me decided NOT to brake when I had to brake because of the car in front of me did, and we all ended up crashing. Luckily it only came to material damages on the cars. While waiting for the police to come rescuing us, I sat in my car and listened to the radio – it is not wise to walk around on a motorway anyway, even when sitting in a queue. Suddenly I heard: “Autounfall auf der Autobahn A7 nördlich von Hamburg Richtung Süden bildet ein Stau” (Car accident on the motorway A7 north of Hamburg going south is building up a queue). My thought in this odd moment, where I only wished to begin my weekend, was: “Yes!!!, I know – I’m very much the reason for this f***ing queue” – even though of course it wasn’t my entire fault.

Being a sales representative on the road, you get to check out a lot of different accommodation. The company I worked for had a non-written agreement with us reps to use as little as possible on overnight stays, which in my opinion is actually to some extend quite OK, since you usually only need a good bed and breakfast when road tripping. The next day you are on the move again. Since I didn’t always knew where I would end up after a long day visiting customers, I sometimes chose to book accommodation last minute. Some of the hotels you find last minute are quite ok – others unfortunately not really that interesting. If you have the time to leave the motorway and go off the beaten track, then I recommend to find a little Gasthaus (Guest house) in a smaller town. It’s like entering another world and they usually serve a very nutritious breakfast that will keep you saturated throughout the entire day. And that all for a very reasonable price.

Even though the reason for being on the road was work and visiting customers, there was usually the possibility to do some sightseeing after working hours. On that account I’ve seen a lot of the sights of Germany. To mention a few, in Berlin the Checkpoint Charlie, Fernsehturm and Brandenburger Tor, in Cologne the Kölner Dom, in München the Neues Rathaus, in Dresden the Frauenkirche that was recently rebuild after the WW2 bombings, the Lübecker Holstentor, the Frankfurter skyline, the wadden sea of the coast of Cuxhaven. Another German tradition is the Weihnachtsmärkte (Christmas market) and almost every town of a reasonable size has its own. Click Germany for more information about tourism in the country. 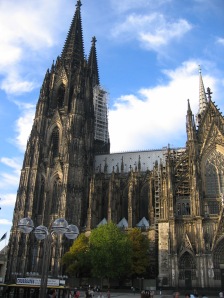 All together even though I was working while on the road in Germany from 2002 to 2006, it was a fantastic and my longest road trip.